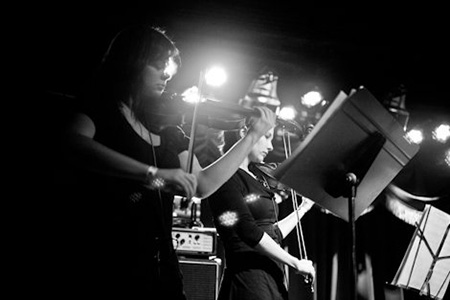 Adriana Teams up with Midnight Masses

When I first heard Midnight Masses in 2008, I knew their songs would sound great with strings. Their neo-soul sound, spacious instrumentation & religious imagery was an ideal setting to add a few lush strings to.

I put together a small string demo for the main singer and founder of the band, Autry Fulbright, and was soon performing & assembling string sections for their shows. Around 2010, the band had begun working with Gerard Smith (from TV on the Radio) on a full-length album. Tragically, Gerard was diagnosed with cancer and passed away within several months. After his passing, recording for the album stopped and Autry moved to Austin to become a member of …And You Will Know Us by the Trail of Dead. Midnight Masses went on a semi-permanent hiatus and the string parts were never recorded.

About a year ago I felt like I needed to record some of the string parts. I got together several string players who used to play with the band, and recorded strings over three pre-recorded tracks. Rick Kwan, a fantastic engineer, helped me record the string parts on “Desperate Man,” “Redemption Rain” and the Sonic Youth cover “Do you believe in Rapture?”

I had always strived for a sweet, lush string sound that would counteract the morbid tone of the Midnight’s songs. In these recordings, we were able to capture that, as well as the essence of the music we were making back then. I hope you enjoy our little trip back in time.

You can download the new string-versions of these songs on Soundcloud. The individual string parts are also available for your own free use.